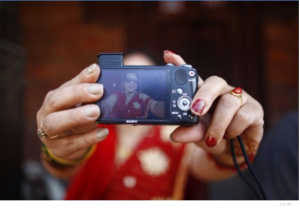 Here’s an headline of a recent well used word on social networks “Selfie” as a mental disorder… Im sure you’d wanna know what this headline is talking about. Find out yourself….

Chicago, Illinois – The American Psychiatric Association (APA) has officially confirmed what many people thought all along: taking ‘selfies’ is a mental disorder.

The APA made this classification during its annual board of directors meeting in Chicago. The disorder is called selfitis, and is defined as the obsessive compulsive desire to take photos of one’s self and post them on social media as a way to make up for the lack of self-esteem and to fill a gap in intimacy.

According to the APA, while there is currently no cure for the disorder, temporary treatment is available through Cognitive Behavioral Therapy (CBT)