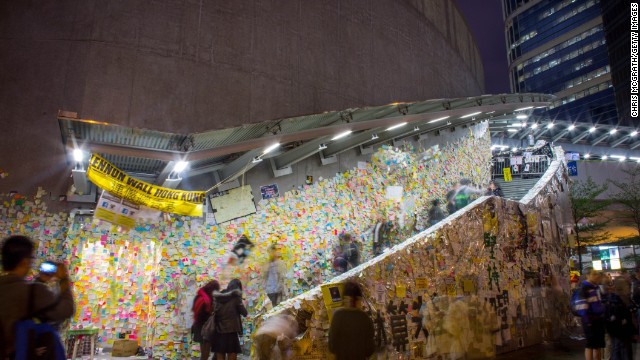 A 14-year-old girl in Hong Kong could be removed from her father’s care after she was arrested for drawing chalk flowers on a wall at one of the city’s pro-democracy protest sites.

The girl was arrested in the early hours of December 23 at a staircase leading to the Central Government Offices in the city’s Admiralty district and was detained by police for 17 hours, said Patricia Ho, the lawyer acting for the teen.

A judge ruled in a youth court on Monday that the girl should be sent to a children’s home for 20 days until January 19. On Wednesday, local media reported the girl was released from the children’s home on bail.

Now: teen drew flowers with chalk on the wall. Lots of police officers are detaining her & others. #UmbrellaMovement pic.twitter.com/zwNM6S8crf
— Fr_ncisco (@funkcisco) December 22, 2014

The wall, known as the “Lennon Wall,” was once covered with colorful Post-it notes and messages of support for the recent pro-democracy protests in Hong Kong. When the protests were cleared, the notes were removed as well.
Protestors started placing notes on the wall as a show of defiance after police used tear gas on demonstrators at the start of the protest, which lead to a two-month occupation of the main road outside the Central Government Office.
The wall was named after the late Beatles star John Lennon and contained messages of support for the protests and references to his song “Imagine.”
‘An innocent political prisoner‘
Ho said the move was “premature and disproportionate.”
“It wasn’t an application by the Social Welfare Department as it usually would be,” she said. “Police threw in a bunch of facts they obtained about the family in a very superficial manner.”
Meanwhile, the court is considering an application by Hong Kong police that she be removed from the care of her father who, according to Ho, is seriously hearing impaired and cannot understand the case.
The move has angered activists; student activist group Scholarism have set up a petition protesting the court ruling and some protestors have started drawing on the road as a protest outside the children’s home in Tuen Mun, where the teenager is being held.
Gary Tsang, who participated in Hong Kong’s pro-democracy street occupations, told CNN the teen was “an innocent political prisoner” and the use of the law in this case was “obviously politically motivated.”
“The government fears young people as they thinks young people have nothing to lose,” he said.
Another protestor, Anson Chui, told CNN the police have lost their common sense and said there would be more similar arrests.
“Most (people)… know that we cannot really cause any damage on the wall by drawing with chalk,” he said. “It is just an excuse used by the police to make us fear. Especially when the court said they are taking away the girl from her father.”

The move comes after police also made an application for a care or protection order for a teenage boy who was arrested during the clearance of another protest site in Mong Kok earlier this month. The court file said the boy’s parents failed to exercise proper guardianship over him.
The court dates for both teenagers will take place in January.
Continued resistance
A small protest camp outside the Legislative Council still remains and there is a small police presence on the site. Police officers are guarding Lennon Wall and remove all notes posted to it at the end of each day.
New Year’s Eve countdown events at popular shopping districts such as Causeway Bay and Tsim Sha Tsui were canceled because of fears that protestors would attempt to hijack the events.
Since the protest sites were cleared, demonstrators have resorted to other forms of protest such as the so-called “shopping revolution,” which involves protestors blocking the sidewalks and flooding shopping districts every night with yellow umbrellas.
Hong Kong Police have not responded to requests for comment.