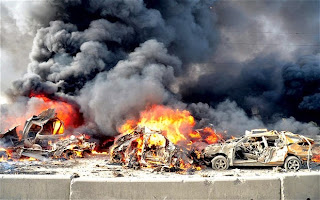 Four suspected Boko Haram members died today after the vehicles in which they each rode in exploded as they headed towards a NNPC facility on Maiduguri-Dambora road in Mule, an outskirt of Maiduguri, Borno State. Apparently they each had their vehicles laced with bombs that would detonate at the same time.

Spokesman for the Joint Information Centre for Counter Terrorism Campaign, Major General Chris Olukolade said that three out of the four explosive-laden vehicles were demobilized by shots fired at them by soldiers at the check point shortly before the explosions.

Reports say five soldiers were killed when the bombs exploded and the exact number of civilian casualties is yet to be ascertained.