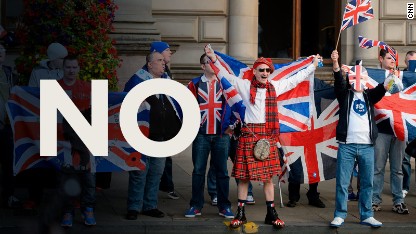 Scotland will remain part of the United Kingdom — along with England, Wales and Northern Ireland — following a historic referendum vote.

A majority of voters rejected the possibility of Scotland breaking away and becoming an independent nation.

“Like millions of other people, I am delighted,” he said.
Cameron said he would have been heartbroken to see the United Kingdom broken up — but paid tribute to the efforts of both sides in the campaign.
“We hear you,” he said to those who voted for independence, adding this was an opportunity to change the way people in the United Kingdom are governed, and “change it for the better.”
His government has delivered on devolution in the past and will deliver on it again, Cameron said.
A “new and fair settlement” will be created for Scotland and the other countries of the United Kingdom, he said.

Scottish First Minister Alex Salmond admitted defeat in an earlier televised statement — and urged the rest of Scotland to do the same.
He thanked Scotland “for 1.6 million votes for Scottish independence” and said the turnout — which electoral officials said was 84.6% from an electorate of more than 4.2 million — was one of the highest in the democratic world for any such vote.
The final result in the referendum was 1,617,989 votes in favor of independence from the United Kingdom to 2,001,926 against.
This means the pro-union camp won by a margin of just over 10%, with 55.25% of the vote to 44.65% — a much wider gap than than opinion polls in the final days leading up to the vote had suggested.
The result means the main political parties in Westminster — and many people across the United Kingdom and Scotland — can breathe a collective sigh of relief that the threat of a breakup of a centuries-old union is over. However, many on the “Yes” side will be bitterly disappointed.
Darling: ‘Unity over division’
Salmond hailed the political engagement seen in Scotland during the campaign and appealed for unity going forward.

“Today of all days, as we bring Scotland together, let us not dwell on the distance we have fallen short. Let us dwell on the distance we have traveled and have confidence that a movement is abroad in Scotland that will take this nation forward, and we shall go forward as one nation.”
Salmond has previously said that if the “Yes” campaign lost the referendum there would not be another vote on independence in a generation.
Labour lawmaker Alistair Darling, who led the pro-union campaign in the Scottish referendum, hailed the result Friday but said that the message that the people of Scotland want change must be heard.
“The people of Scotland have spoken,” he said.”We have chosen unity over division and positive change rather than needless separation.
“Today is a momentous result for Scotland and also for the United Kingdom as a whole — by confirming our place within the union we reaffirm all that we have in common and the bonds that tie us together. Let them never be broken.”
He gave a commitment that the political changes promised by the Westminster parties — involving the devolution of more powers to Scotland — would be kept.
Darling also called for the country to unify after debate that “has created some fairly deep divisions in our country,” and a campaign “that has both energized but at times divided” the Scottish people.
“Those divisions now need to be addressed and that requires leadership,” he said, promising to play his part.

Clegg: Radical package of powers
Deputy Prime Minister Nick Clegg, whose Liberal Democrats are in a coalition government with Cameron’s Conservatives, said he was “absolutely delighted” by the result.

“In a dangerous and uncertain world I have no doubt we are stronger, safer, and more prosperous together than we every could be apart.

“But a vote against independence was clearly not a vote against change and we must now deliver on time and in full the radical package of newly devolved powers to Scotland.
“At the same time, this referendum north of the border has led to demand for constitutional reform across the United Kingdom as people south of the border also want more control and freedom in their own hands rather than power being hoarded in Westminster.”
The first councils to declare all went to the “No” campaign, as did the capital, Edinburgh, which voted overwhelmingly to stay in the union with 123,927 for “Yes” and 194,628 “No” votes. Argyll and Bute and Aberdeenshire also voted “No.”
Glasgow delivered a solid win for the independence camp with 194,779 votes for “Yes,” and 169,347 for “No,” but the lead was not big enough to overturn the “No” camp’s overall majority.
Political fallout
Scotland has had a devolved government since 1999, meaning many, but not all, decisions are made at the Scottish Parliament in Holyrood, Edinburgh.
As opinion polls showed the lead held by the “no” vote shrinking fast in the days leading up to the referendum, the leaders of all three main parties in Westminster responded with the promise to give major new powers over tax, spending and social welfare to Scotland if it stuck with the United Kingdom.
Now the party leaders face the challenge of pushing those changes through a possibly rebellious Parliament on a tight timetable.
The process of handing over those new powers will start from Friday, Cameron said in a speech in Aberdeen earlier this week, with draft legislation expected as soon as January. “This is a timetable that is now agreed by all the main political parties and set in stone and I am prepared to work with all the main parties to deliver this during 2015,” he said.
Although Scotland has chosen to stick with the union — staving off potential calls for his resignation — Cameron will still face political fallout over the vote.
Critics have accused him of complacency during the long months of campaigning when Salmond’s “Yes Scotland” campaign was laying the groundwork for its late surge. His longtime Labour rival, former Prime Minister Gordon Brown, is credited by many with bringing the vital energy that carried a lackluster “No” campaign to victory.
Critics have also accused Cameron and the other main party leaders of giving away too much in a last-ditch effort to keep Scottish voters on board.
It remains to be seen how the promise to give greater powers also to England, Wales and Northern Ireland will be borne out.
Cameron will also likely face difficult questions over his own leadership in the run-up to a general election due to take place next May.