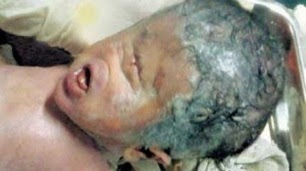 The baby was born to a 16-year-old girl in the nation’s Eastern Cape and she died a day later at the Nelson Mandela Academic Hospital. The baby also had no nose and the one eye was set in the middle while the remaining area was covered with skin. According to reports: The birth of yet another deformed infant to a 16-year-old mom from the Eastern Cape has raised serious concerns. The Eastern Cape Health Department is now calling for research into why so many babies were being born with deformities in the province. Eastern Cape spokesperson Sizwe Kupelo told the South Africa news agency that some 50 deformed babies have been born in the region in the past two years and there is no “documented cause” for the growing trend.

Describing the baby girl born on Saturday at the Dr Malizo Mpehle district hospital in Tsolo, near Mthatha, Kupelo said: “She was born with a small man-hood on the forehead and one eye on the forehead.” “She was born with no nose and where there are supposed to be eyes there was nothing, just skin covered over the area.” Earlier this month, a pair of conjoined twins were born also at the Dr Malizo Mpehle district hospital in Tsolo, SAPA reported, adding that they were the fifth set of conjoined twins to be born in the region in the past year and half. Other deformities witnessed in the area include babies with their hearts and brains exposed, as well as babies born with multiple penises and legs. Doctors in the area remain “in the dark” as to the root cause of the growing number of deformed babies, Kupelo said and has asked specialists and researchers to help determine the cause. He also hopes to bring in more pediatrics specialists. In most cases, babies born with deformities die, but “where necessary we attempt procedures but unfortunately the majority die,” Kupelo said .