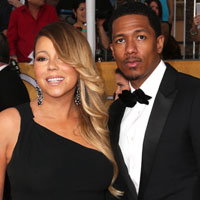 Mariah Carey and Nick Cannon’s break-up and divorce will probably be in the headlines for months to come, considering the fact that they have millions of dollars, twins Moroccan and Monroe, and eight dogs to bicker over, it will be months and maybe years before we hear the end of it.

Mariah Carey caught a lot of backlash when she began dating Nick Cannon in 2008, seeing as how she was ten years older than him. Rumors have swirled since the couple married that Mariah was paranoid about their age difference and constantly concerned that Cannon was going to leave her for a much younger woman, and it looks like her worst nightmare has finally come true.

It really depends on who you ask, but the driving force behind Mariah Carey and Nick Cannon’s divorce is reportedly Nick Cannon hooking up with younger women and partying all night with friends his own age. However, some fans of Nick’s believe that Mariah drove him to cheat with her diva behavior and ridiculous expectations. Since news of the couple’s divorce broke, Nick has been linked to 23 year old model Jasmine Sanders.
According to the September 29th edition of GLOBE Magazine, Mariah is livid over Nick’s affair with someone two decades younger than her, and determined to get revenge.

GLOBE’s inside source reveals, “Mariah is furious! She feels humiliated and wants a new boytoy…someone younger and hotter than Nick that she can parade around town.”

So, Mariah Carey is on the prowl again, let the Cougar jokes commence. What hot young celebrity do you think Mariah will sink her claws in to in order to prove to Nick that she is over him and can get someone younger and hotter too? Share your predictions in the comments below!