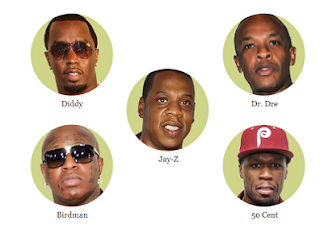 Forbes has released their top five richest hip hop stars and the pack is lead by Diddy who is worth of $700 million with an increase of $120 million over his net worth last year..

-Dr Dre-The large chunk of his income comes from Beats By Dr. Dre with annual sales reportedly in excess of $1 billion and growing. -Jayz’s recent growth comes from Roc Nation, his record label and management firm that recently added a sports agency. -Birdman’s net worth would be over $300 million if he didn’t share his fortune with brother Ronald “Slim”.They founded Cash Money Records two decades ago signing artists like Drake, Nicki Minaj and Lil WayneWilliams -50 Cent, owes most of his fortune to his $100 million haul from the sale of Vitamin water in 2007