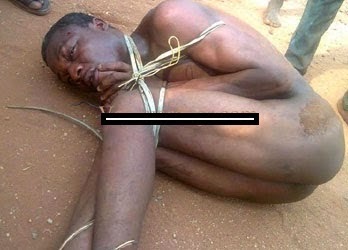 Things we hear happening these days leaves me to wonder if we are really living on days of many wonders. Same State where a police corporal killed his wife with seven other people before killing himself, another unimaginable has happened. According to an eye witness report, a 65- year old retired magistrate, Mrs Olufunmilayo Timeyin by her domestic aide, simply identified as David…

According to the News Agency of Nigeria, Timeyin, who retired as a senior magistrate in the Ogun state judiciary, employed the domestic aide about two months ago. David who hails from Benue, was said to have been sacked and arrested by the police after he allegedly stole jewellery, mobile phones and some electronic gadgets, from his boss. He however, returned to the house Friday afternoon shortly after regaining freedom from police custody and jumped the fence.

He was alleged to have deactivated the security alarm system in the house and lurked in one corner, while an unsuspecting Timeyin returned from an outing.

The witness said Timeyin packed her blue Toyota Camry car– marked Lagos KIA 141 BU– outside the house, apparently planning to go out again. The source said that the domestic aide attacked Timeyin with a machete immediately she opened her gate.

Timeyin’s son, identified as Olumide, who arrived the house with his mother, raised an alarm that a thief was inside his mother’s house. But, by the time neighbors came round, the retired magistrate had been beheaded and his assailant and house-help had escaped into the bush.

The suspect was, however, arrested by residents of the area and handed over to the police. The Chief Judge of Ogun state, Justice Olatokunbo Olopade, and the Commissioner for Local Government and Chieftain Affairs, Chief Muyiwa Oladipo, were part of important dignitaries who had visited the home of the deceased as at 8:00 p.m. on Friday.

Though the state Police Public Relations Officer, Muyiwa Adejobi, could not be reached for comments, policemen from Kemta division of Abeokuta were at the scene as the body was being moved to the morgue at about 8:00 p.m.

God continue to help your us in this wicked world!.